July 24, 2008
It's the crystal skull of the sandwich world. The perfect Cuban sandwich. One assumes it might exist in Cuba, or maybe Miami or Tampa, but one hasn't been to those places, so one keeps looking.

I've been searching for about four years now. I've consistently run into a problem of balance. Cuban sandwiches are almost always authentic but lacking, or delicious but not a true Cuban sandwich. Still, I'm convinced an authentic, delicious Cuban Sandwich is out there somewhere.

My notes over the years are mostly incomplete, and those that exist are largely unreadable, having been made opaque by mustard or invisible by grease. As follows is a list of some memorable Cuban Sandwiches I've had, and what was wrong with them:

- Country Flame (French Quarter, New Orleans): My first. I remember it being really good, but the details are hazy owing to red wine, humidity, and a lack of other sandwiches to compare it to. I do recall that their dinnertime drink special was $1 peppermint schnapps shots, which was tempting despite being disgusting.

- Atlanta Bread Company (Aurora, Colo.): A tasty but overpriced sandwich, and one that I ate many times. It has all the right elements, but inappropriately adds mayo and substitutes focaccia bread. Remember: it's what's between that counts, and an overly thick bread can make it impossible for a sandy's filling to shine. 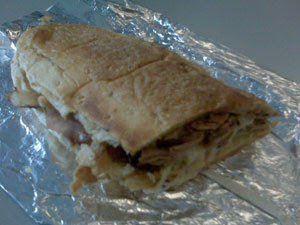 - Redwood Deli (Queens, NYC): An excellent Cuban-style sandwich (pictured), that has more in common with a drippy pulled pork than a Cubano. Greasy chunks of pork loin are piled onto a crusty bread instead or the usual thin-sliced style associated with a Cuban. Like ABC's offering, overpriced and unauthentic, but good on its own terms.

- El Siglo XX (Old San Juan, Puerto Rico): Authentic but missing pickles and mustard. This could have been a contender for best-yet, but needed some sweet and sour to cut through the fatty-saltiness. The bread was thin and crusty, the pig was moist and the cheese was gooey and plentiful. But without those key condiments, this was just a pressed grilled cheese with ham, albeit a delicious one.

There's a lesson in geography here. Go to the source. I'll have my authentic Miami Cubano by year's end, as trusted sandwich operative Stu is moving there soon. I could ask for no better scout to find the Good Stuff in the land of palms and pig. As for Cuba herself, I appeal to you, Young Castro: Let me in. We can do this the easy way or we can do it the hard way. You can be cool and let me in, or I can get all sneaky on you and go in through the back door, Bay of Pigs-style. The people have a right to know the truth (about your national sandwich and its reputed deliciousness)!

Edit: I now understand that it's not so much that Cuba is keeping me out, as the U.S. is keeping me in. What the hell? Give it up, State Department, it's time to drop the grudge!

Let's go for it! Cuba here we come! - I prefer to Canadian or Dominican style of seeking into Cuba. And just in case any of those .gov hits that are going to your site are federal agents. i want to say "i'm just kidding - i would never ever want to go into Cuba because that is illegal." but seriously let's go. I got a guy with a boat, and that's all we need.

Alex Headrick said…
You got a guy with a boat? Is it Captain Paco? I hope so.

Sandwich Agent Stu is moving to Miami in a week, and will be scouting for the best sandwiches upon his landing. I'll be down to head to MIA in about five weeks, once Stu's report is filed.
July 26, 2008 at 11:47:00 AM EDT