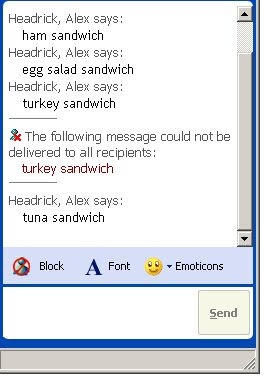 At what point does a sandwich become dangerous?

That's the question I'm faced with as I consider a disturbing, recently unveiled plot to silence sandwich speakers at my workplace. This week, I learned from a pair of respected colleagues that the phrase "turkey sandwich" is not allowed on our network's chat client.

Previously, I was baffled by Messenger's rejection of the word "jerk." "You're a jerk," I said, and it told me the message couldn't be delivered. I was forced to say, "You're a j-erk," which wasn't nearly as satisfying.

The same intrepid friends who broke the case dug deeper, checking Urban Dictionary for a hidden, sexy meaning behind the sandy name. But all it revealed is that "turkey sandwich" is a way to instruct someone to run, like saying "cheese it!" Urban Dictionary also suggests "turkey sandwhich" is an obscure term for oral sex, but then, what isn't?

Am I missing something? Why would the phase possibly be blocked?