July 27, 2009
Hi, everybody. I figure it's about time to start blogging about sandwiches again. I have a bunch of unpublished drafts sitting around, so I'm going to start (barely) polishing them up and posting them before writing anything new. What's new? Well, I ate a gravy and cheese turkey sandwich today, for one thing. That was pretty good. It was excellent, in fact. What else? Not much. I'm still living in New York City and still eating lots of sandwiches. I'm trying to eat more salads despite the fact that I kind of hate salads. I won't let that get in the way of this blog.

Here's my review of DnD's waffle sandy. I'm going to go ahead and just publish the notes since they're already organized and because I've no motivation to deal with paragraphs right now. But basically, this sandwich was kinda crappy. Not everyone feels this way, but from my sandwich-learned viewpoint, it's a case of the whole being less than the sum of its parts – not a good thing. Here we go: 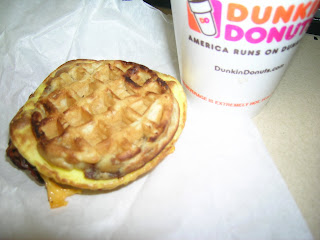 Appearance: Surprisingly small. Like a soggy brown hockey puck with some brown and yellow egg spilling out.

Taste: Confusing. Unappealing. Flavor cycles between all the various parts. I get blueberry, then cheese, then egg, then bacon then all of it over again. My sandwich was burnt in places, so I got a bit of charred flavor as well. A trainwreck of breakfast tastes.

Of note: While eating, a coworker stopped by and said she’s a fan of the sandwich and gets it every day. She likes the fact that it’s not sweet and appreciates the smoky bacon taste. It’s true – although there’s a little sweetness, sugar’s not the predominant taste. I was expecting it to taste syrup-soaked like a McDonald’s McGriddle, but it didn’t.

Overall: Two things ruined this for me. First, the blueberry smell, which was powerful and unnatural. It was overwhelming before I unwrapped the sandwich and lingered a good half hour after I finished it. I probably smelled like it for the rest of the day, and just didn’t notice because I got used to it. Second, too many flavors. I get the appeal of a bunch of breakfast foods in one package, but I’ve gotta draw the line at the blueberry waffles. Yes, that’s the whole point. Turns out I don’t like it. Beyond bacon, egg and cheese, a breakfast sandwich doesn't need any more strong flavors, save hot sauce. Toss those on an English muffin or some toast or a roll and you’re golden.

Send this thing back to the failed sandy scrap heap.

Mark said…
Have you seen thisiswhyyourefat.com yet?