A pilgrimage completed, a champion crowned

July 28, 2009
For the sandwich faithful, certain holy sites are mandatory visits for the truly devoted.

I'm told Miami has the best Cuban sandwiches outside of their namesake. Pittsburgh is home to Primanti Brothers' mandatory meat/slaw/eggs/fries/etc. sandwich. And in New York City, one has lots of choices, but I'd heard the top sandy destination is Katz's Deli for their pastrami on rye. 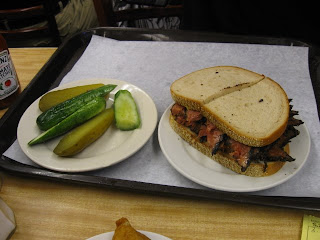 With visitors Kyle and Jamie (who took the picture) in town, the time had come to pay homage to Mr. Katz and his fabulous sandwiches.

We went, and it was better than I'd dreamed. Have you had a pastrami on rye? Pretty good, right? Especially with some Boar's Head meat. But it's not even in the same league as this thing. It's not the quantity Katz gives you, although that's impressive, but the hot juiciness of the meat. Here's the deal.

You get a ticket, and walk up to the sandwich counter. The sandychef asks you what you want, and you say a pastrami sandwich. He carves a sample hunk of pastrami off of a slab of meat, hotel buffet prime rib style. You eat it, and are amazed. He proceeds to pile several slices of the pastrami onto some hearty rye bread and hits it with some mustard. You take the finished sandwich and a plate of half- and full-sour pickles back to your table and delight in the game-changing awesomeness of the mountain of pastrami you are devouring.

Peppery, moist, incredible. The bread's tang cuts the savoriness well, as do the pickles, and, if you're bold, the can of Cel-Ray celery-flavored soda you ordered.

If you care about meat, a trip to Katz's Delicatessen is a must. My time there ruined my corner deli hot pastrami on ryes going forward. This is the Wayne Gretzky of pastrami sandwiches. Go to New York. Get one.

What other sandwiches are essential? Let me know.