September 26, 2010
Let me back up. If you live in Pennsylvania you're probably on board, but I imagine several people are already wondering who Wawa is.

With that stature came influence, which Wawa has used to advance its pro-hoagie agenda. Indeed, despite the prominence of the cheesesteak, Wawa somehow convinced Philadelphia to name the hoagie — the chain's trademark sammy — its Official Sandwich. Capital Letters and all!

For all my time spent sandwich blogging, this is the first I've even heard of an Official Sandwich. I asked the internets about it and they said this isn't a unique case. In fact, the Fluffernutter may be the official sandwich of Massachusetts, and the Big Mac was once positioned as the Official Sandwich of the intifada.

Fascinating stuff. But this post has clearly derailed, and matters of the West Bank are far, far outside of this blog's reach.

The point here is robots. Wawa's got 'em. How does this affect you, you ask? Me me me. It's always about you, isn't it? Well that's human nature, I suppose. Here's how. 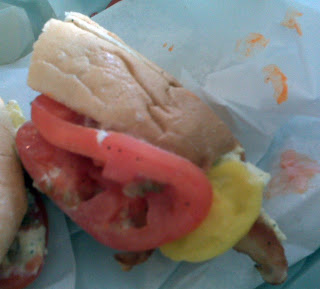 Let's say you like spicy food. Maybe you tend to order things like spicy chicken wraps and crispy Buffalo chicken sandwiches. Good on ya. But you have a creative mind, and you can imagine spicier things than a black peppered breaded chicken patty with tomatoes, lettuce and mayo on a bun, right? Maybe you'd order such things if they were presented to you. Or maybe you don't trust the graduates of the University of Subway to deliver the ideal creation you've dreamed up. I understand. Why, just today I visited a Subway and experienced a full-on communication breakdown trying to customize a fairly basic Italian BMT. It happens, and we sandy conniseurs forgive and forget because for all our big words and highly personalized topping preferences, we don't actually care in the end. It's a bunch of veggies and crap piled on some meat on a bun, and that's OK.

This scrappy store from the home of scrapple says no, that's not OK. Wawa says, "we know our employees will screw up your order if you try to explain it to them." And that brutal honestly is so needed in today's sandwich scene. Whether it's the indifferent sandwich-maker's fault or that of your mush-mouthed ordering, inevitably, your order ain't coming out quite right.

So they provide a simple, touchscreen interface that minimizes your interaction with their employees. You point at stuff you want and the computer tells them what to make.

Simple. Accurate. Effective. That's what robots bring to the sandwich world via Wawa.

What does this mean? It means we as humans need to rise up and show these ones and zeroes sandwichmachen the difference a loving touch makes. Accuracy means nothing compared to a sandwich thoughtfully prepared by a skilled sandy chef. I loves me some Wawa, but I know we can do better. Let's all do our part preventing a Terminator-style sandwichpocalypse by putting a little more care into our sandwiches. Our children depend on it.

Alex said…
Being a native Philadelphian, I have beeen visiting Wawa for years. I didn't realize they were responsible for the Hoagie being named Philadelphia's Official Sandwich -- I must say, I would have voted for the cheesesteak. But Wawa is a Philadelphia staple for quick lunches, amazing coffee, and other random junk food (including Tastykakes) and time of day or night, any day of the year.

I enjoy the sandwich ordering robot machine's efficiency. It gives options that you may not have thought of sans-robot(e.g. "Would you like to add bacon to that?"). It also lets you specify the amount for certain ingrediants (e.g. "a little bit of cream cheese" on bagel sandwiches). I am glad they have retained human beings as the official sandwich makers...though customers have little interaction with them besides taking the wrapped sandwich when their number is called. I have noticed the prevalence of robots in Wawa in increasing - Robotic milkshake makers, robotic coffee-dreink makers, icee machines, and soda machines....luckily the regular coffee in pots is still brewed by human beings (and perhaps that is why it is one of the best offerings at any Wawa).
September 27, 2010 at 11:59:00 AM EDT

Rimpy Rimpington said…
I would like to try the robot at least once, if for no other reason than the novelty of it. I think I would have agree with you that a human interface is the hope for our continued sandwich existence.
September 27, 2010 at 11:11:00 PM EDT

Alex Headrick said…
Lauren - Thank you for your thoughtful response. Agreed that the cheesesteak makes more sense -- they should have polled Philadelphians on that one. Good point on the robot's suggestions. The correct answer to "would you like to add bacon?" is always yes. The ability to specify how much sauce/spread you want is a key feature, too. Cherish the human-brewed coffee while it lasts -- K-Cups are the way of the future.