June 29, 2010
If you know me personally then you may know that I've spent a sizable amount of time professionally editing and uploading photographs of cake. Its not often that I get to do so for leisure, so its with great joy that I present to you: the peanut butter and jelly sandwich cake. 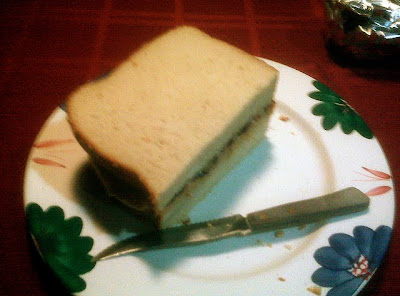 This beauty is in fact a cake, but it's also rightly a sandwich. You might call it a mash-up of food genres — a dessert sandy. A cakewich (not to be confused with The Broodwich).

The cake was thoughtfully prepared by some loved ones one spring weekend. I can't think of a more appropriate cake given my studies in the field of sandwiching and friend-of-the-blog Lauren's PB&J'expertise.

Eating a slice of the sandwich wasn't much different from eating a normal PB&J. It was more decadent and tasty than its common inspiration, but it felt to me more like eating lunch than dessert. This made it too easy to justify eating a leftover slice for dinner, thinking "there's nothing inappropriate about eating a sandwich for dinner."

This lead me to think that other traditionally off limits foods could be repurposed as acceptable meals if they were simply rebranded as sandwiches. We've already seen work in this area with the Monte Cristo — a dessert by many definitions but classified as a sandwich due to the presence of deli meats and its similarity to a croque-monsieur.

I believe the secret to this happy deception is in the bread. Here at It's What's Between, we often neglect bread, hence the name of the blog. Yet there's no denying that pound cake as bread could be a gamechanger.

I've seen donuts used as bread, but you and I know in our hearts that they're outside the realm of sandwichstuff credibility. Would brownies as bread be out of the question? Probably. I think any substitute dessert needs to at least resemble the real McCoy.

So what makes the cut? Pound cake clearly passes, as does the Monte Cristo's French toast. Waffles and pancakes are also suitable; consider the breakfast sandwich. Beyond these examples, I'm stumped for now, but I'm convinced there are others out there.

Do you have any ideas? This could be big. We're talking a sandwich revolution here.

Alex said…
Yay!!! Lots of intriguing thoughts on the fine line between desserts and sandwiches. The bread may, in fact, make all the difference. I believe I also ate a few pieces of this as a meal instead of a dessert....though after eating real pb and j for lunch, I wasn't much in the mood to eat the cake form of it after work, so it was reserved for a weekend snack.