Gas station sandwich reviews were a big part of this blog's early days, long before the tragic intern incident of '08 and It's What's Between's subsequent Icarus-like skyrocket to superblogdom (pending).

I don't eat many gas station sandies anymore, namely because I don't own a car and therefore rarely require gasoline. But I noticed one of my local bodegas sells a sandwich equivalent -- frozen microwavable sammies for the cheap and incredibly lazy. There's little justification for buying them because generally, another bodega on the same block will sell a proper, freshly made Boar's Head sandwich for a buck or two more. But a pizza sandwich caught my eye the other night. I considered my lack of motivation to cook and, while wondering what a pizza sandwich is, bought the thing and zapped and ate it. What follows is the result.

The term "pizza sandwich" calls to mind a calzone. I assumed it to mean pizzaesque ingredients inside of something bread-like. That's roughly what this turned out to be, though the filling was a sad homage to the glorious foodstuff that is pizza. 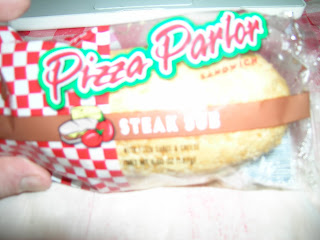 Examining the package, a few things stood out to me. One was a well-drawn picture of a sandwich in a microwave with the overlaid text "60 seconds." My microwave is tiny, and necessarily so given my little apartment, so I made a mental note to add at least 45 seconds. I've found an extra minute or two necessary to cook most things. It's not uncommon to read directions (I'm looking at you Marie Calendar's and your delicious pot pies) that say not to bother and use an oven if you have a microwave with as low a wattage as mine. Well I'm sorry, I assumed a Target-bought microwave would cook everything found in a basic supermarket freezer. Cram it (Marie), I'm adding a few minutes and nuking it anyway.

What was I saying? Oh yeah, the package also described its contents as a "Steak Sub With Pizza Sauce & Cheese." Looking back, that's a more accurate description of the "pizza sandwich" my mind edited the title into.I guess Pierre is going for an approximation of the kind of sandwich you might get in a pizza parlor.

I noticed the sandwich weighed 187 grams. Since I associate that number with murder, I briefly doubted my dinner decision. I forged on nonetheless.

The list of ingredients was daunting. Yet when I broke it down, it was really just overly complex assemblies of a bun, meat and cheese. Here are some highlights from the main components, bearing in mind that these are but a few of the many sub-ingredients included:

The "fully cooked chopped beef steak with pizza sauce": (beef, pizza sauce, then: Parmesan cheese, catsup, HFCS, grated Romano cheese, enzymes)
Three issues here. One: catsup? No one calls it that. Get real. Second: HFCS: WTF? And third: Enzymes? That's so vague. I remember little about them, but wikipedia says they look like this, so I'd like a little more explanation.

That brings us to the cheese, and there's nothing too scary here, just: Mozzarella flavor pasteurized process cheese (sodium citrate, soy lecithin (for slice separation))
Fair enough. I like my slices separate. The cheese description is a little sketchy but I'll let it slide.

With the ingredients out of the way, all there is to say is that the thing comes from Pierre Foods of Cincinnati. 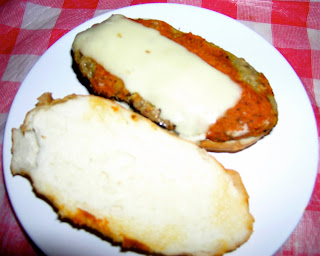 Now the review. First question: does it taste like pizza? Answer: no.

Is it good? Not really. Why? There's too much bread, for one. The taste is nothing but fatty meat and fiercely fatty cheese dominating every bite. The tomato sauce is barely present, and could use some more vinegar and tomato to cut through the lipid onslaught. Despite the meager cheese portion, almost all I could taste was the intensely rich Mozzarella flavor pasteurized process cheese. I can't say it was an unpleasant flavor, but it wasn't something I wanted a mouthful of, either.

The pizza sandy tasted like a subpar freezer case White Castle slider, with extra cheese and a bit of tomato flavor. Honestly, that's appropriate given the price (approximately $2.50 -- I don't remember) and source. On a universal scale, this was a terrible sandwich. But within the desperate late night bodega environment, the Pierre Pizza Parlor Sandwich delivered, meeting its expectations. A good sandwich? No. A good sandwich for someone unwilling to assemble real food at an hour most people are asleep? Yes. Hence, a solid 2.5 on the Husson Sandwich Scale.

Anonymous said…
I really like when people are expressing their opinion and thought. So I like the way you are writing
February 19, 2010 at 3:36:00 PM EST