Another monstrosity escapes the bowels of Hell 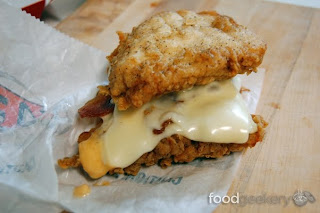 It's What's Between founding member Michael alerted me to the KFC Double Down, as reported by Food Geekery, who kindly supplied this photo. Make no mistake, this is the third horse of the sandwipocolypse, the first two being The Sandwich of Knowledge.

What is it? It's two pieces of fried chicken, two kinds of cheese, bacon and the ominous "Colonel's Sauce." What about the bun, you ask? The fried chicken IS THE BUN.

Playing devil's advocate, yes, the fried chicken is breaded, making it bun-like. Is bun-like good enough, though? No it is not. This is a mutant, and not in the next evolution of sandwiches sense. This ... thing ... must be destroyed.

This is unnatural. This is wrong. Dammit, I must slay this unholy beast by going to KFC and eating it dead. This is my lot as a sandwich blogger, and a self-destructive one at that. I will eat it, or die trying, or eat it and then die later of related causes.